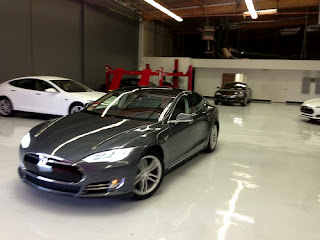 I'm only slightly green. Only in so far as I'm a bit cheap. I'm not much of a gear head. Yet I do have an engineers' fascination with gadgets and stuff. Nor am I politically inclined, except as a spectator sport. I'm mostly bored by polemics.  I'm not a "car guy," that peculiar LA species that is obsessed with cars, yet knows little more about them than the price. Ultimately, then, if Tesla were a real club, it is unlikely that I'd be admitted. Fortunately, I guess, admission to this club requires little more that an e-mail address and suppression of the inner voice that tells you a Prius would work fine, too.

My excuse is that, after living in LA for so long, it is only fair to give this car thing a shot in a serious way.  Since abandoning my bike commute, the two-hour round trip freeway slog in my company-issued monster truck has been unbearable. I've tried the learn-a-language, listen to BBC, rock out, call family, have conference calls, quiet time, sing aloud and general multi-tasking car commutation techniques. They all stink.

It occurred to me that most people in LA seem to have "nice" cars. "Nice" being a general descriptor for a car owner's belief that his ride makes him a bit more fly. I've never owned a nice car. The few times I've personally owned a car, it tended to make me seem much less fly than I might otherwise be. In the vein of being dissed by a valet or provoking inquiries about my state of employment.

Since the people with nice cars seem to have reached a detente with their commutes, perhaps I would too, if I picked up a more compelling mobile metal shell.  The Tesla Model S is a great candidate. Consumer Reports (part of my inherited obsession with having only starkly competent small appliances) calls the Model S "better than anything we’ve ever tested before.” The car is embraced by greenies and gear heads. With a little convoluted accounting and some tax breaks, it could demonstrably save money. It's built by one of my favorite billionaires. It was pretty clear that, after conceding to the idea of a nice car, it should be a Model S.

I picked the thing up about a week ago. It's honestly the auto equivalent of the first time I held an iPhone. It just felt different. It speaks to you about the obsessions of its creators. It tells you that very smart folks spent a great deal of time in front of blanks screens, reinventing an entire experience rather than just a device. But here's the sad truth: even one of the great expressions of innovation so far in this century cannot overcome the suckiness of a daily car commute. It still stinks.